...that's what we could be in for if the United States and Russia miscalculate in their respective acts of brinkmanship in and around Georgia. 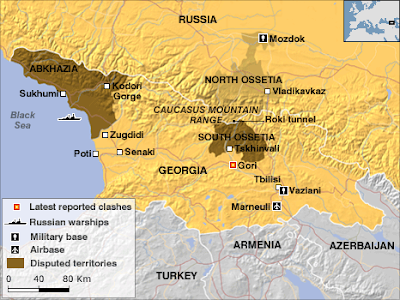 Source: BBC
The BBC reports that the US Military is going to deliver humanitarian aid to Georgia. While this is consistent with their past actions in Burma after Cyclone Nargis and in the Philippines after Typhoon Fengshen(Frank) where the Americans deployed their Navy for this purpose, doing the same thing in a situation where Russia is one of the belligerents has the potential to further destabilize the situation.

If matters deteriorate further, this time around, Fidel Castro's role* could be reprised by Georgian President Mikheil Saakashvili.

*As per Wikipedia, during the Cuban Missile Crisis, "In a personal letter to Khrushchev dated October 27, 1962, Castro urged him to launch a nuclear first strike against the United States if Cuba were invaded, but Khrushchev rejected any first strike response."
Posted by cvj at 1:36 AM

Not you, not the Vatican, not the Crescent Cross or even Doctors Without Borders... no one should do anything that "...has the potential to further destabilize the situation"

If the Vatican, the Crescent Cross or Doctors Without Borders don't bring along weapons, then i don't see how they can further destabilize the situation.

Never underestimate the paranoids. Preaching human rights or religion, even the act of helping "the other side" can appear very destabilizing to the paranoid.

Anonymous, perhaps that's why they're called 'paranoids'. BTW, every side has them.

Just wondering why Putin is not reminding America of its invasion of Afghanistan and Iraq. At least, Russia is invading to assist the ethnic aspirations of Abhkhazis and Ossetians -- a worthy cause that Americans are fond of doing.
Interestingly, Americans are not consistent in their meddling. While Americans have words on the Tibetan cause, they are silent about the similar ethic aspirations of Kurds in Turkey, or the Malay Muslims of Thailand, or other ethnic groups trapped in the clutches within borders where other ethnic groups dominate.

Come to think of it, Russians have another way of dealing with the ethnic clamours of Chechens in the Caucasus.

Hi Anonymous, good point. I'm not sure if Russia has brought up the USA's inconsistency but maybe it's too obvious to belabor. In particular, the Americans lost the moral high ground when it invaded Iraq under false pretexts.