I find the excitement accompanying the recently reported 6.9% year on year GDP growth (for example in blog entries here and here and in this comment here) a bit puzzling. Yes i know it's good news, but what i find odd is the claim that such growth is unprecedented, for example, as reported in the Financial Times article linked above:

"Government economists said the country’s gross domestic product rose by 6.9 per cent from the same quarter last year, the highest rate since 1990 [emphasis mine]..."

One look at the NSCB Statistics (i.e. the 'Time Series' data) shows that we've had better performance as recently as three years ago, i.e. the first and second quarters of 2004 with 7.15% and 7.1% GDP growth respectively (as visualized in the bar graph below).

Year on Year GDP Growth Rate
[Source: NSCB]
Unless my understanding is wrong, the above quote should then read:

...the country’s gross domestic product rose by 6.9 per cent from the same quarter last year, the highest rate since 2004...

Any clarifications (from government economists or otherwise) would be greatly appreciated.

Update 1:30pm: Dave Llorito pointed out that the First Quarter GDP growth rate is 6.4% and Second Quarter GDP growth rate is 6.2% for the period 2003 to 2004. This is as reported in the NSCB's press releases here and here. Taking the underlying values from the press releases for First and Second Quarters of 2004 and comparing them to the GDP data populating the Time Series referred to above, the discrepancy can be traced to the difference in reported GDP values as follows: 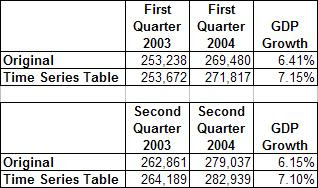 It would seem that at some point after the original 6.4 and 6.2 percent GDP growth figures were published, a revision to the GDP figures for these quarters was made. By contrast, there is as yet no discrepancy between the GDP figures in the NSCB Press Release and the time series data for both the First Quarter 2006 and 2007. If this is the case, it's still odd that the government economists still use the old data for purposes of comparison. Perhaps i'm still missing something so any explanations on this practice are most welcome.

Update 01-15-2008: Over at Dani Rodrik, economist Arvind Subramanian raises similar questions concerning revisions in GDP Data of other countries.
Posted by cvj at 2:43 AM

Naturally, anything that the gma admin can boast about, they will! You may be right about 2004 to be the correct reference year, but as you may well know correctness is not what the promoters of fantasy kingdom is after.

Huh? Aren't you happy, Kulas, that GDP growth was even even higher than what government has actually reported? BTW, it's commom practice for NSO/NSCB to adjust data. When government officials were harping about the 6.9 percent growth, our stat agencies havent updated the numbers yet.

GSE, i'll ask you the same question i asked David Llorito in his blog - Is it normal practice to still use the originally published data for comparison purposes even after these have been superseded by revised data? If yes, why?

If im not mistaken, when govt officials speak on TV, they use the official release as reference. But by the time the following quarter's (or year's) numbers are released, they start using the adjusted data. That's what I noticed early this year (or was it late last year?) when they released the 4Q (or 3Q...my memory fails me) GDP. I think it's because the officials who speak on TV aren't updated the moment new data is available. The NSCB only talks about its adjusted data during its quarterly briefings.

gse, thanks. in this case, the relevant adjusted data pertains to the 1Q and 2Q 2004 GDP figures, so unless the revision for the above occured just recently (i.e. after the 1Q 2007 GDP figures came out), the government spokesmen should have taken this into account in stating their comparisons.

I agree. But it's also possible that they overlooked it. It would be strange for NSCB to update the 2004 numbers three long years later. I hope government clarifies this.