During my recent visit to Anna de Brux, one of the questions she asked me was whether i was a Socialist. Although anyone who has read my comments or blog posts would immediately understand that i'm left of center, i honestly did not think my set of beliefs would qualify me as one. (Others have labeled me a Stealth Communist, which has a nice ring to it but is nevertheless an inaccurate characterization.)

Fortunately, Dani Rodrik has a timely pointer to the Political CompassTM site which has a test that helps to locate your ideological coordinates. The x-axis (left/right) shows where you are in the economic spectrum while the y-axis (authoritarian/libertarian) represents your place in the social dimension. My scores are -3.25 (x-axis) and -3.13 (y-axis) respectively which, as shown in the graph, brings me in the neighborhood of Gandhi.* 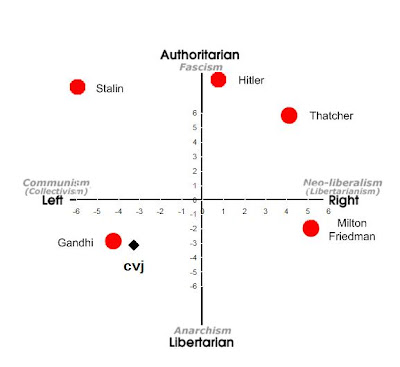 Of course, this wasn't always the case. Although, i have always been anti-Fascist, i started out in my teens as a free-market capitalist (from watching Milton Friedman's Free to Choose TV show back in the 80's) and then became a Reaganite supply sider (from reading George Gilder's Wealth and Poverty). My ideological journey leftward has taken decades and is something that i did not plan or expect. Who knows what will happen in the future?

Update 11-21-07: As a response to Anna's invitation, i took the test again and this time my score was -4.25 (for the left/right economic spectrum) & -3.03 (for the authoritarian/libertarian political spectrum). After 5 months, it appears i've become a little more socialist and a tiny bit less democratic.

*Since i did not have the raw scores of the above historical figures, i had to manually scale the graph so my location relative to Gandhi may not be that precise.
Posted by cvj at 12:14 AM

My ideological coordinates are:

I had to really think about some of the questions and ended up debating with myself. :-)

The "compass" puts me on the "right" side of economics
(but more to Chirac's score versus Thatcher):
Economic Left/Right: 1.00
Social Libertarian/Authoritarian: -2.05

Socialism is one of those words that have been made very 'negative'. It probably means different things to many people the same way that 'liberal' is a bad thing in the USA.

Funny, how GMA and Esperon came to Europe last year to put the blame of political killings to the Socialists/Comunists/Leftist groups. It didn't occur to them that most successful Western European countries are socialist.

Abe, Jego, Arbet, UPn, thanks for volunteering your scores. I realize the test is not perfect but it's fun to take nonetheless.

Nash, for the true meaning of being a liberal, i believe the late Steve Gilliard said it best.

Couldn't access test but I have a feeling I would be more like Chirac & Sarkozy as well as Cameron (definitely not Merkel nor Berlusconi either) and definitely a Thatcher - middle ground (?) with a streak of authoritarianism.

PS I have to sign up to my ID and couldn't be bothered to so signing as anonymous but you'll know who I am.

Hi Anon, i would concur with your assessment on where you lie within the Political Compass. As for Tony Blair, i agree with you that he is a damn pillock.

Btw, cvj, here's the follow on comment of mine that wouldn't appear in Manolo's blog after your exchange with Dean re "leftist":

Hmmmm - says, ‘Your comment is awaiting moderation.’ so will try to re-post:

But Dean, you too were once a leftist, weren’t you when you were playing activist, that’s why Marcos put you in jail?

While at that time, I was pro-Marcos all through and through, absolutely backing Marcos and military policy then to round up all those communist students and activists, shall we say, like you…

I’m inherently still anti-left when that left threatens my way of life but I do believe that the left today (not where I sit) no longer espouses the downfall of my ‘capitalist’ life although I will never adhere to the UK Labour Party with or without Tony Blair, not even the UK’s New Labour dogma nor to the French Socialist Party dogma - never!

Isn’t it rather uncanny that those who were once leftist become more conservative, nay "worse" than the conservatives, than the traditional conservatives the moment they turned around? So, perhaps, given that, inconsistency is progress, wouldn’t you say?

I tend to think just as The Vigil said about what he perceives as his radicalization under Bush and Cheney, that we've been radicalized by the Bush-Cheney-Blair-Rumsfeld war on Iraq while in the Philippine setting, Glori and her Malacanang gang have contributed to this radicalization.

I know for a fact that my disgust over the Iraq war, the unbelievable rise of Christianofanaticism and it's resulting Islamophobia, the war on Lebanon, the Palestine issue, Afghanistan, extra-judicial killings in RP, the Burma issue, Mugabe's continuing crimes, etc., changed my outlook towards authoriatarianism or far right wing view of the world (and before that, believe that Mandela's humanity had a great influence on my thinking.)