Via Schumey, it is clear that whatever school this lady came from did not teach history properly. It is also unfortunate that her parents failed to teach her the right values. As expected, she and like-minded individuals would rationalize that they are just 'being real'. Of course, such an excuse is self-serving because facing reality in its fullness would require admitting to themselves that they are grotesque specimens of humanity.

Either that or she's just channeling Simoun and trying to manufacture another EDSA Tres moment, in which case all i can say is congratulations and keep up the good work. 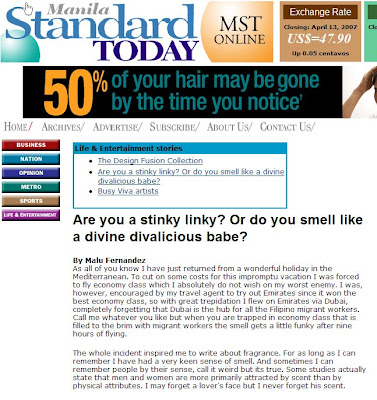 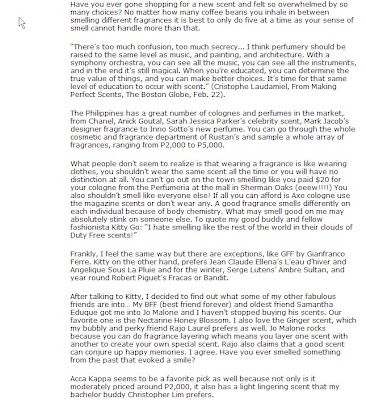 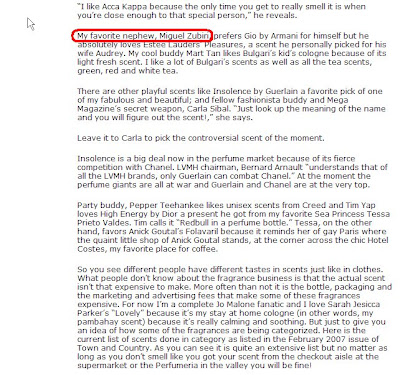 Update (August 18, 2:33PM): I'm not in favor of having her fired for the same reasons given by John Marzan. It was really only a matter of time before the inevitable Tu Quoque would be brought up, which as has been discussed before, is logically flawed but may be morally compelling depending on the context. I've been in enough conversations (with both fellow OFW's and home-based Pinoys) where we have criticized other nationals for the very same reasons that Malu Fernandez has so i would have to toss aside the stone on this one.

Update (August 18, 8:29PM): As a response to those who are not in favor of getting Fernandez fired, blogger Sparks stresses the importance of distinguising between private communication (e.g. among a circle of friends) and writing for public consumption. I still have to digest the significance of this line of argument. My ambivalence towards firing is that i don't want this line of thinking to go underground. Here in Singapore, the government has legislated 'Out of Bounds' (OB) markers, i.e. matters that cannot be talked about. I wouldn't want our own version of that. If the Manila Standard wants to build itself up as the newspaper for the elitist mindset, then that's their lookout. It's better if the elitists and racists are where we can see them so that we can put them up as negative examples. For one thing, Malu Fernandez' name dropping could be useful for the purposes of a future transitional spring cleaning.
Posted by cvj at 10:11 PM

Do you think the elitist mindset is at work in the recent blog wars?

There is no danger of her inciting another EDSA Tres. Her column will put you to sleep.

Arbet, which particular blog war? In any case, i think the elitist mindset is at work in many aspects of Filipino Society, especially its politics.

Does anybody know if she is actually from de buena familia?

And most of all she hates swimsuits!

yup, we, the rich and the really sosyal, love the beach. :p

ms. fernandez is apparently trying to be paris hilton. geez this reminds me of tim yap but i can't make a precise connection at the moment.

Resty, i think that what Malu Fernandez and Tim Yap have in common is their connection with Marie Antoinette which is a combination of callousness and cluelesness on matters relating to social class.

And we all know what happened to Tim Yap.

As expected, she and like-minded individuals would rationalize that they are just 'being real'. Of course, such an excuse is self-serving because facing reality in its fullness would require admitting to themselves that they are grotesque specimens of humanity.

Ms. Fernandez's "GET REAL" mentality reminds me of this guy.

If the Manila Standard wants to build itself up as the newspaper for the elitist mindset, then that's their lookout. It's better if the elitists and racists are where we can see them so that we can put them up as negative examples.

exactly. i want to use her as an example for others to see. we can use this as a teachable moment. huwag tularan. don't be an ugly filipino.

if we are successful in getting her fired, it would be a symbolic victory. for this new media. for ofws.

hmmm... will "old media" pick up this story?

they will if the sound and fury from blogs, mailing lists and forums get loud enough. :)

Im not in favor of getting her fired either, reprehensible as she is, although Manila Standard might be forced to make that choice. Im reminded of the saying, 'How can we know what's on somebody's mind if we dont give them the freedom to speak their mind.'

The new media is such that she can stay where she is and she will be watched. I like Ms. Fernandez's way of thinking out in the open.

perhaps we should create a BLOG ROADBLOCK?

A “Roadblock” is the placement strategy used by advertisers to create a big buzz when launching a new campaign. For example, at exactly 8pm on Easter Sunday, all channels, from ch.2-5-7-9-23 would show the same TV commercial at exactly the same time, hence creating a roadblock… no matter where they go, the viewers see the same thing. It cannot be IGNORED. Even by media.

We can do the same here, we of the thousand blogs!!!

I also suggest that all of us bloggers put up the same Title and include a graphic (something like a “Fire Malu!” logo, Ghosbusters style) that we can all put up on our blogs simultaneously.

Both the title and logo should show some restraint, as some of us are more reserved than the likes of myself, who gleefully put titles like “You’re Bacon, Bitch!!!” on my blog.

I think we can come to a consensus here. Ideas? Suggestions? Artwork? please send me an e-mail: spanxster@gmail.com, or drop a line at www.spankyenriquez.blogspot.com