Philippine Society and the Elitist Mindset

An exchange this morning with Benign0 over at mlq3's blog provides an insight on the way Filipino elitists think. This remark was particularly revealing:

"Now that you mentioned it, I’m quite a superstar where I work as well. But the question is this: are we really representative of the *average* Pinoy schmoe? Do you think people like us got to where we were thinking and acting like a typical Pinoy?" - Benign0 at May 24th, 2007 10:05 am

This echoes what he said to me earlier over at Ellen Tordesillas' blog:

"But do you really think that people like you and I are truly representative of the Filipino people? Just because there are a handfull of brilliant individuals does not necessarily mean that the society to which said individuals belong to is collectively brilliant.

Walk the streets of Tokyo and you will see quite a number of homeless bums. But to draw the conclusion that the Japanese are a bunch of lazy winos just because of a few homeless individuals is a fallacy.

Don’t presume to know the Pinoy masses, simply because you yourself are Pinoy." -Benigno at February 5th, 2007 6:55 am

A Filipino elitist believes that he or she is somehow better than the typical Pinoy. While this observation is unremarkable in itself (to the point of being trite), this mindset when combined with a flawed understanding of Philippine society leads to all sorts of attribution errors. While everyone recognizes that we have a highly unequal society, the typical elitist somehow accepts that we live in a meritocracy, with the prosperity they enjoy owing nothing to their lucky circumstance and everything to their own or their parent's (or ancestors) hardwork. Once again, Benign0 expresses this view when he told me that:

"Unfortunately I do not see you or myself as “lucky”. We are merely the culmination of the hardwork of our ancestors and, hopefully, continuing to build upon the capital of this hardwork by working hard and smart ourselves so that our own offspring will benefit and pass on this capital to the next. Let’s not be-little what our parents, grandparents, and great-grandparents achieved by considering ourselves “lucky”. - Benign0 at February 5th, 2007 1:56 pm"

The Filipino elitist's view of society can therefore be represented in the form of the diagram below, with the yellow icons representing the hardworking and smart members of our society: 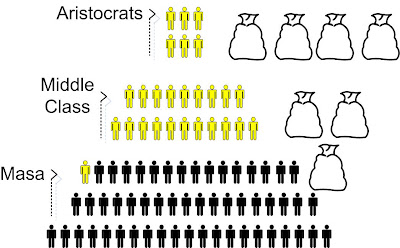 Given this scenario, the elitist comes to the self-serving conclusion that there is nothing unjust in having resources (as depicted by the 'moneybags' in the diagram) concentrated among the smaller proportion of capable Filipinos who belong to the members of the Upper and Middle classes since these have been obtained through merit. Furthermore, since these segments represent the so-called cream, it would be advantageous to concentrate political and economic decision-making to this group. However, I doubt that the above picture matches reality since we know that our society is a long way from being a meritocracy.

Since I believe that in the Philippines one's position in life is determined to a large extent by factors other than individual merit, a more realistic picture would be the one below where the smart and hardworking segment of the population (as represented by the yellow icons) proportionally distributed across all classes: 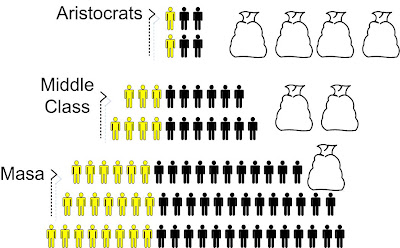 One major consequence is that our full potential for development is not realized because the capable people who belong to the masa have fewer resources to work with (again as depicted by the 'moneybags'). An important policy imperative therefore is to make available to these individuals the resources that will allow them to maximize their capabiities and maximize their contribution to our country's progress.
Posted by cvj at 12:30 AM

Hi Chuck,
Regardless of how you shuffle and resuffle the classes of society, one thing does not change: the conditioning of the people. It is like the circus flea - conditioned and trained under a bowl so it will only jump so high. When the bowl is removed, it will only jump so high, even if it can jump higher.
The MASA have been advised to get educated in order to get a good job ... and so he does. He was not conditioned to achieve the opportunities for advancement, shown as moneybags in your sketches. Only the rich and the elite have those opportunities because they were born to it with the silver spoon in their mouth.
How many parents do you know, advised their sons/daughters to start their own business and become entrepreneurs? /Luis

I agree with you that the masa in the Philippines do not enjoy the same access to the advantages that the guys in the 'aristocracy' class enjoy and are thus left so much behind, culturally (education), which leads eventually to intellectual stagnation.

After reading your piece on Benigno's rebuttal and counter rebuttal, I've come to the conclusion that actually, what he's mouthing all along is a Benignofied version of the Peter principle. Not very original, is he now?

In a way, while I believe that there will always be different layers in society, I sincerely believe that a bit more homogenity between layers should be life's standard if those who have "more" don't want to risk the prospect of losing what they've worked hard for.

To be blunt, I do believe that all it takes is a decent amount of prosperity gurantee - across the masa board - to ensure the survival of the aristocracy and the class directly underneath.

That prosperity of the masa is the aristocracy's own best safeguard without which, they truly run the risk of seeing their own class evaporate. I think history has proven that in more than a few events past, i.e., France, Russia, China, etc.

When that happens, whose mindset can be now deemed retarded? Is it the masa's who will fight to the finish, the same class who will overhaul the system - and whom Benigno seems to hold in abject contempt - or the aristocracy's (and their immediate subalterns) whose very own life existence gets dangerously exposed and whose existence in their little planet becomes realistically threatened?

In this scheme of things, who now deserves the sobriquet of idiot?

Your second diagram looks a lot like the basis for my 'suffrage' experiment. (I know, I know. Let's not get into that again. :-D )

Where would the rich be without the masa. From the way I see it, take away the masa and the aristocrats will be nothing. Now you and I will be branded communists again.

Hi Luis, i'm all for encouraging entrepreneurship, but unless a person has a source of capital, getting a steady job will be a less risky bet, at least in the short run. Of course some would choose to go into business anyway. Most of them will fail but those who succeed do benefit society in a large way. What i'd like to see is more of our upper class, the ones with easier access capital, investing in industry rather than seeking to preserve their haciendas, speculating in real estate or parking their money overseas.

Hi Anna, thanks. I agree with you regarding France, Russia and China. In the case of China, in a previous post from two weeks ago, i pointed out that the losing nationalist army of Chiang Kai Shek internalized the lesson of being beaten by Mao's peasant army that one of the first things they did in Taiwan was to institute a genuine and comprehensive land reform. One more example is Venezuela which, as Kevin Grier of Marginalrevolution.com explains, got Hugo Chavez because of decades of inequality. I know you had some reservations about Trillanes, but i have a feeling that he has the potential to be our local Hugo Chavez (minus the overtly socialist rhetoric) one of these days.

Thanks Resty. Benign0 is quite an audacious character. I hope he reveals what 'private school' he went too so i would know which institution specializes in giving both a quality education and a swollen head.

Hi Jego, yeah i remember our discussion. I initially thought that you had something like the first diagram as the basis and then you explained that it actually was the second that you had in mind. However, I wouldn't necessarily disenfranchise those who are represented by the black icons since in real life, it is hard to separate the 'yellow' from the 'black' icons, but more importantly, because i think only the individual can best represent his own interests.

Hi Schumey, i agree. That's also the message of Hardt and Negri in their book 'Multitude'. The poor nowadays (whether employed and unemployed), are the source of much of the world's wealth in the form of 'the common'. I'll elaborate more on this in the long delayed next installments to my blog entry from two months back.

RULE 2
The world won't care about your self-esteem. The world will expect you to accomplish something BEFORE you feel good about yourself.

RULE 3
You will NOT make 75,000 dollars a year right out of high school. You won't be a vice president with car phone, until you earn both.

RULE 5
Flipping burgers is not beneath your dignity. Your grandparents had a different word for burger flipping they
called it Opportunity.

RULE 6
If you mess up,it's not your parents' fault, so don't whine about your mistakes, learn from them.

"The results you achieve will be in direct proportion to the effort you apply."
--- Denis Waitley

Rule ZERO : You have to know your current worth, and that you can be worth more next year and the year after with effort.


cvj : you are worth more than the average Pinoy, and you are a fool by denying it. The Fool-part is that they who deny being above-average hold themselves back from progress and begin to coast, as it were.

Anonymous, i never denied being 'above average'. In fact, this is what i told Benign0 in the exchange i referred to above:

”I also happen to think that i’m ‘good’, but at best above average. That means that there are at least 30 to 40 million other Filipinos, who given the opportunity, can be as good as me.”

That would be evident as soon as you do the math. Do i believe that they all belong to the Upper and Middle class? That cannot be the case since the above number already exceeds the population of both groups (even taking the lower figure). Also i’ve met enough stupid and swell-headed members from those classes to know that they could not all be ‘above average’. This means that millions of above-average folks are stuck in the lower class. The only difference between me and them is that my circumstances allow me (for good or bad) to express my individuality.

its was really valuable. thanks a lot.
wealth