Maybe there's a completely reasonable explanation for this but looking at today's running tally (as of 12:20pm) for the Senatorial race by NAMFREL and COMELEC at Inquirer.net's Election Tally page, i find it odd that while the COMELEC tally is ahead of NAMFREL, the number of votes for the bottom nine Senatorial candidates are lower than that of NAMFREL's figures. (Refer to the circled area in the graphic.) 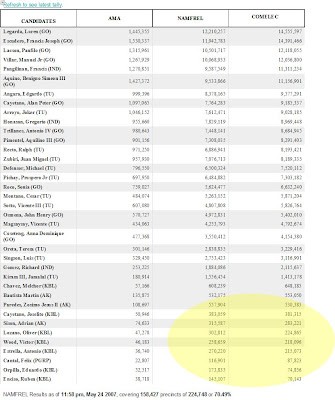 My worry is that the votes for these cellar dwelling candidates are being reallocated to boost the chances of other candidates who are within striking distance of the Top 12. For anyone who has a more in-depth working knowledge of the counting and tallying procedures, I would appreciate any clarifications on this.
Posted by cvj at 12:10 PM

This news item says it all, i.e., there will be changes in the Senatorial slots:

There are more than 96,000 registered voters in Lanao del Sur but Abalos claimed he could not readily ascertain how it would affect the fate of the candidates tailing in the senatorial race.

According to Abalos, the certificates of canvass from the province would no longer be brought to Manila for the national canvassing but to Marawi City, in the presence of poll watchdogs and representatives of various political parties.

The National Movement for Free Elections (Namfrel), meanwhile, claimed their volunteers were prevented by armed men from entering the polling precincts in Lanao yesterday.

According to Namfrel secretary general Eric Alvia, several of their volunteers were prevented by armed men in fatigue uniforms from witnessing the special elections.

“We are still not sure whether the heavily armed men were government forces or members of private armies, but many of them were in fatigue uniforms,” Alvia said.