Via Political Theory Daily Review, a paper* in the Economist about how mobile phones have helped fishermen in Kerala. It explains the "ways in which mobile phones promote more efficient markets and encourage economic activity." In a nutshell, the mobile phone allows the fisherman to identify the market where fish is in demand so he does not have to sell the fish at a give-away price or otherwise throw them away. This of course results in higher income for the fishermen. This provides concrete support to previous studies linking mobile phone penetration to economic growth:

"A well known example is the finding in 2005 by Leonard Waverman, of the London Business School, an extra 10 mobile phones per 100 people in a typical developing country leads to an additional 0.59 percentage points of growth in GDP per person."**

The above is relevant to the Philippine situation as the deregulation of the Telecoms industry in the 90's resulted in the widespread adoption of mobile phones so if the same pattern is followed here, then some of the growth over the past few years could at least be attributed to FVR's Telecoms deregulation. The Waverman finding cited above states that:

"Indeed, the results suggest that long-run growth in the Philippines could be as much as 1 percent higher than in Indonesia, were the gap in mobile penetration evident in 2003 to be maintained. The Philippines had 27 mobile phones per 100 inhabitants in 2003, compared to 9 per 100 in Indonesia."

While i find it easy to believe that mobile phones do contribute to economic growth by removing economic inefficiencies (e.g. fishermen not being able to go to the right fish market to sell their catch), the contention that the contribution to growth will be for the long-run will depend on whether the increase in mobile phone penetration contributes to economic growth via growth (or rate) effects or level effects. According to economist Robert Lucas***, growth effects are...

", changes in parameters that alter growth rates along balanced paths"[see diagram below] 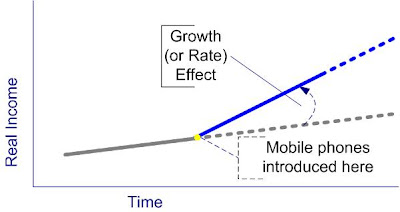 ...in which case the change in the rate of growth is expected to persist for a longer period (as depicted by the dashed portion of the blue line) while level effects are... 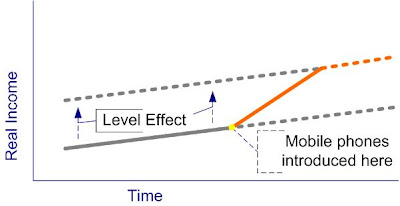 ...in which case the rate of growth will taper off sooner rather than later (as depicted by the dashed portion of the orange line). The ability to distinguish between the two effects would, among other things, help us find out for how much more longer can we benefit from telecoms (and other similar) deregulation.

Update April-17-2008: Jessica Zafra points to (and helpfully summarizes) a New York Times article on how cellphones can help eradicate poverty, which is closely related, but should not be mistaken as identical to, promoting economic growth.

*The Digital Provide: Information (technology), market performance and welfare in the South Indian fisheries sector”, by Robert Jensen. To be published in the Quarterly Journal of Economics, August 2007.
**Leonard Waverman & Geoff A. Edwards, The Effects of Public Ownership and Regulatory Independence on Regulatory Outcomes: A Study of Interconnect Rates in EU Telecommunications, January 2005
***Robert E. Lucas Jr., Lectures on Economic Growth, 2002, Harvard University Press
Posted by cvj at 3:52 PM

i was just wondering...

if mobile phones are a means of communication, and it could be said communication (i.e. relaying where fish can be sold) is a subset of "information" (i.e. business intel), so by extension, can we not say that economic growth may be correlated to growth in availability of communication and information?

So therefore can we say that in a knowledge-based society, the greater the access of a people to communication and information, the greater their potential for economic growth?

(btw, i deleted my previous comment because of a typo.)

Hi Cocoy, yes, greater access to communication and information increases the potential for economic growth, although i believe that different kinds of information affect growth in different ways. In the case of the fishermen, higher income for them happens because the mobile phones remove the inefficiencies that resulted from the lack of a means to communicate with the fish markets. In short, higher income is the result of better coordination. My guess, however, is that the kind of growth that comes from removal of inefficiencies via better coordination can only take us so far and will eventually taper off (as shown in the above diagram on 'level effects').

I believe that the kind of information that actually leads to a sustained acceleration in the growth rate (as shown in the diagram on 'growth effects') comes in the form of (1) continuous productivity gains that result from 'learning by doing' new things and, more importantly, (2) the production of new knowledge. The former normally happens in a big way within business firms while the latter happens within R&D departments, universities and government sponsored science parks (as in the case of Taiwan).

One looming threat for all developing countries is the aggressive push to protect 'Intellectual Property' coming from the first world. This danger has been highlighted by Lawrence Lessig among others. It is becoming a struggle to keep knowledge and its production public which is why i think your advocacy for Open Source and the Creative Commons plays an essential part in keeping the window of development opportunities for the Philippines open.

This mobile phone utility for farmers is already in place in some parts of Africa.

Matter of fact, there is a British NGO that's been collecting old mobile phones to be sent to farmers in parts of West Africa.

In one TV documentary, a farmer who lives in a remote area not serviced by public transport uses her 2nd hand mobile phone to for emergency calls to a vet or animal husbandry expert to come and cure her animals.

She used to walk the 6-hour stretch to the capital to get help and often on return, her animal is dead - but not anymore. The mobile phone means saving time and with that comes less economic hardship.

Hi Anna! Thanks for that real-life example. And then, there's also Willy Prilles' suggestion of incorporating cell phones as part of automating the elections.