Reacting to my observation on the negative correlation between Oil Imports and GDP per capita, commenter UPn Student suggested that:

I think that suggestion made sense so i did some research. I divided the Final Energy Consumption* figures in my preceding post by the applicable population for a given year and mapped the result to GDP per capita** as follows: 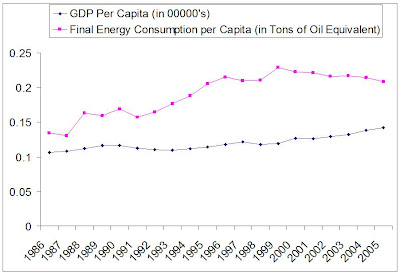 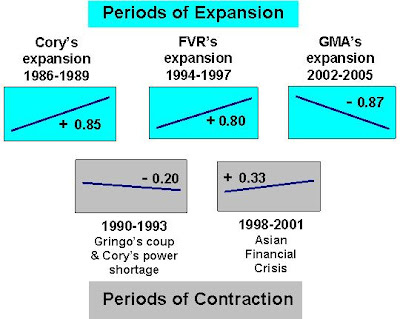 Figure 2: Correlation Coefficients: GDP per Capita and Energy Consumption per Capita
Click on image to enlarge
For the periods of GDP expansion (1986 to 1989, 1993 to 1997 and 2002 to 2005), the above show similar patterns of correlation between per capita GDP and Energy Consumption as my previous computation which was based on Oil Imports. (As can be seen, for the three periods of expansion, the values of the correlation coefficients are practically identical.)

The first two post-EDSA expansions under Cory and FVR shows the expected positive correlation between per capita GDP and per capita Energy Consumption. By contrast, the current expansion under Gloria Arroyo shows a negative correlation. Even after factoring in the contributions of Malampaya's Natural Gas starting in 2002, the strangeness remains.

The next step would be to identify the 'missing' component and match that to the sector of the economy that seems to be consuming less energy than it normally does. Among the three components of Final Energy Consumption for the period 2002 to 2005, both Coal and Electricity has shown a positive correlation. In contrast, Petroleum has shown an almost perfect negative correlation:

Table 1: Correlation Coefficients: GDP per Capita and Energy Consumption by Source (2002 to 2005)
So the missing energy turns out to still be Petroleum (which is derived from Crude Oil).

Which sector of the economy then has been consuming less and less Petroleum per capita as per capita GDP increases? Of the three broad categories of power consuming sectors of the Philippine Economy, i.e. Industry***, Transport**** and Others***** (which includes the Residential and Commercial Sectors), all have shown negative correlations when it comes to Petroleum consumption and GDP per Capita:

Table 2: Correlation Coefficients: GDP per Capita and Petroleum Consumption by Economic Sector (2002 to 2005)
It may again be argued that Petroleum is not the only source of energy of the above sectors so we need to consider the possibility of substitution of Petroleum by other sources (e.g. Electricity and Coal). If we take into account all those other sources of energy (i.e. Electricity and Coal) used by these sectors into the computation of the Correlation Coefficient, we get the following results:

Table 3: Correlation Coefficients: GDP per Capita and Energy Consumption by Economic Sector (2002 to 2005)
The above shows that for the Industry Sector, substitution of Petroleum by other sources may offer a plausible explanation for the reduction in its usage. However, for the remaining sectors such as Transport and Others (includes Commercial and Residential), the question of missing energy is still unresolved. The alternative explanations i can think of are the following:I would welcome inputs and alternative explanations from the readers.

Update 7:00pm: In the comments section, Gabby asks how i determined whether a given sector substitutes between energy sources. For each sector, i computed the correlation coefficient using Petroleum Consumption (in the green cells) and did the same with Total Energy Consumption (in the yellow cells) as follows:

Table 4: Final Energy Consumption (in ktoe)
Industry Sector (2002 to 2005)
As seen above, with Petroleum alone, the Correlation Coefficient was negative (at -0.84) but if we include other energy sources i.e. Coal and Electricity, the value turns positive (at +0.83). This means that the increase in the alternative Energy Sources more than compensated for the relative decrease in Petroleum. The same cannot be seen for the rest of the sectors as shown in the following tables where the coefficients have remained in negative territory:

Update Nov-16-2008: Economist-blogger Tyler Cowen of Marginalrevolution, takes a similar over-all approach to the above and applies it to China. He speculates that the year-on-year change in generated electrical power in China for the month of October may be a more reliable indicator than government-reported GDP statistics.

Update Jan-27-2009: In response to GabbyD's query in the comments section, here is the relative share of the Transportation Sector to total GDP (1990 to 2008).

hey good work! got a question, when you wrote:

"t may again be argued that Petroleum is not the only source of energy of the above sectors so we need to consider the possibility of substitution of Petroleum by other sources (e.g. Electricity and Coal). If we take into account all those other sources of energy (i.e. Electricity and Coal) used by these sectors into the computation of the Correlation Coefficient, we get the following results:"

how do u know how a sector substitutes between energy sources? how do you know the magnitude of the substitution? what is your technique?

moreover, what is the interpretation of the positive number? it is the correlation coefficient of GDP per capita and that sector's Petroleum consumption? But if there is substitution, then shouldn't it be negative (i.e. as GDP per cap rises, petroleum consumption falls as the sector uses more of the alternative sources)?

again, thanks, this is a very interesting question!

Hi Gabby, thanks! I have posted the raw data that i used to compute the coefficients and explained my method of arriving at whether other energy sources substituted for petroleum.

You went to all this trouble just to prove to some dumbwits projecting themselves as bigtime financial gurus in some blog, the sloppy figure-tweaking this government's ANAL-leasts, er, analysts have been feeding The Great Economist for her praise releases and speeches.

I couldn't have done it as clearly as you did, but it saves us pundits of all the effort that would have been needed in explaining how smuggling and data sugarcoating cannot be hidden even by the most careful fabricators.

Peter Wallace, if he's reading this, I'm sure would sum it all up in a one-word interrogative: "See?"

Thanks Tongue, coming from you it's much appreciated! I also did some comparisons with other APEC-member countries and will update this post when i get the time. Suffice it to say, our profile is much more like that of Hongkong which is odd because we seem to be behaving like a 'rich-country' economy.

You forgot to mention even substitution by coal is much overstated since Napocor bought its stocks at ridiculuous prices.

But looking at energy figures, I'm awed by the prevailing estimated costs of new power projects. While it is global rule-of-thumb to price new power plants at $1M per Megawatt, the sole non-conformist, it seems, is the Philippines whose costs are between $1.6M - $3M per MW!

To top it all, bidders are willing to pay that amount for our OLD Napocor plants!

Tell me, what's included in the package?

Tongue, thanks for pointing that out. I could not incorporate any over(or under)-pricing since the energy statistics are expressed in terms of kilotons of oil equivalent (ktoe).

In any case, if you can point me to links for the coal and power plant overprice, i'd be interested in that information as well especially since high domestic energy prices has been identified (by the ADB) as a major critical constraint to our economic growth.

Energy consumption is being understated. It may be that the smuggled oil is not being accounted for in the Energy Balance Tables.

I have no problem with smuggled oil can distort our GDP,but I won't consider it a factor on energy consumption.

I went back to mlq3's blog and he pointed out what is happening ( to be fair the developments that he is talking about is way after this blogpost.
With the benefit of hindsight we can see that there are indeed factors to consider like breaking down of powerplants(ex Ilo-Ilo) due to lack of preventive maintenance to improve the performance of a powerplant by improving the heat transfer process in coal plants. It was presented in the power summit by one of the people my dad is consulting.

and it is true that aboitiz and san miguel is now agressive in the power sector.

about the coal contracts.
I know by this time alam mo na.(just in case hindi pa)

that's all for this topic.

BTW, thanks for the links on the Napocor coal supply contracts. I was not aware of this issue.

thanks! another question (this is one year late!)

so you detect substitution by looking at the changes in correlation of the energy sources by sector to GDP over time. ex, in industry, the correlation is positive for total energy, negative for petrol, then there is subsitution into other forms of energy.

you can also look at in terms of shares, if you wish. if petroleum share in industry is falling as the total is rising, the others must be growing.

in tables 4 thru6, is this correlation is the correlation of energy (petrol or total) consumption to GDP?

did the output/production of transportation and 'others' grow as well as a share of GDP?

this is the missing piece. if their output shrank relative to overall GDP (smaller share in GDP) then their relative energy consumption doesn't rise as much, or even falls. then it makes sense that total petroleum consumption/imports falls.

this is particularly important for transpo. from your data, total energy consumption is roughly 1/2 accounted for by this sector (the balance shared by the others).

Hi Gabby, tables 4 to 6 are the correlation of Energy Consumption, measured in Kilotons of Oil Equivalent (KTOe), to per capita GDP.

I checked the NEDA figures (which i've posted as 'Table 7' in the main blog entry), and it seems that the share of Transportation relative to Total GDP has grown over time, including the period of 2002 to 2005. Unfortunately, the NEDA classification lumps Communications along with Transportation, but we can further cross check the growth of Transportation via the number of Motor Vehicles registered over the same period. A quick look at the number of motor vehicles registered indicates that the Transportation sector has been growing from 4.2 Million in 2002 to 5 Million in 2005.