Matter and Energy: Ordinary and Dark

I just finished reading Lisa Randall's book Warped Passages, which i highly recommend especially now that the Large Hadron Collider (LHC), where many of the theories she discusses in the book will be tested, is about to start operating.

While Randall's main focus is on theories involving extra-dimensions, she explains a lot of related topics along the way, and for me, one of the most striking details she reveals has to do with the varieties and relative proportions of matter and energy in the Universe. Randall explains... 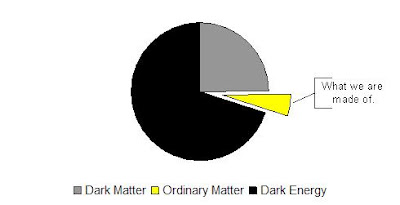 "Dark Matter is the nonluminous matter that pervades the universe and has been discovered through its gravitational influence. Even though about one-quarter (25%) of the energy in the universe* is stored in dark matter, we still don't know what it is...

...The universe contains dark energy** (energy not carried by any matter), that constitutes seventy percent (70%) of the total energy of the universe...No theory [is able to] explain dark energy."

By contrast, ordinary matter from which we are made of makes up the remaining five percent (5%).

Update April-20-2008: Via 3Quarksdaily, an experiment that claims to detect Dark Matter in the form of Weakly Interacting Massive Particles (WIMPs).

Also, here's the web page for NASA's Wilkinson Microwave Anisotropy Probe (WMAP) that i mentioned in the comments section. It has further interesting information including this Timeline of the Universe. 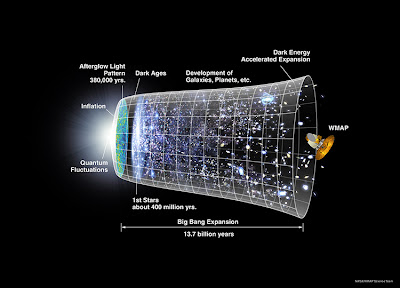 Click on image to enlarge
In the above diagram, the acceleration of the Universe's expansion due to Dark Energy is noticeable.

Update April-25-2008: Over at Cosmic Variance, blogger-physicist Sean Carroll explains that the famous equation e=mc2 does not apply in the case of Dark Energy.

"Interestingly, the dark energy that makes up 70% of the energy of the universe doesn’t really have “mass” at all, since it’s not made up of objects (such as particles) that can have a rest frame — it’s a smooth field filling space."

*Matter and energy is intergchangeable via e=mc2.
**This mysterious Dark Energy is also known as Vacuum Energy and was first proposed by Einstein as the Cosmological Constant and more recently theorized as a new substance called Quintessence. Its presence is inferred by the observation that the expansion of the universe seems to be accelerating.
Posted by cvj at 12:23 AM

Ah, that by which we are again reminded on how tiny a speck and how insignificant we are in the vastness of the universe.

I have often wondered about this Dark Matter/Dark Energy thing. First is, why the distinction? According to the theory of relativity, matter and energy are the same. Second is, if no one has directly observed DM/DE, and scientists merely infer their existence on the effects of gravity, what makes them so sure that it is their understanding of how gravity works that is at fault instead of introducing a new factor into their equations? It is quite possible that Dark Matter doesnt exist. But that's just too boring. And scientists wouldnt have been granted gazillions of dollars to build the LHC and similar apparata to try to look for DM/DE. ;-)

(A note on John Moffat, the scientist in the link: He's a legend. Einstein personally endorsed him for a PhD. He's a highly original thinker and isnt afraid to go against the current dogma.)

I meant 'not their understanding of how gravity works...'

Hi Jon, somehow that is a comforting thought.

Hi Jeg, i understand that Dark Matter still fits into the Standard Model extensions (e.g. Supersymmetry) while the value of Dark Energy can only be taken as a given. In terms of effects, Dark Matter is distinguished by its gravitational effects where galaxies clump together to a degree not accounted for by ordinary matter. On the other hand, Dark Energy has the opposite effect of speeding up the expansion of the Universe. From my layman's understanding, i'm not sure that Dark Energy is covered by e=mc2 but don't take my word for it.

On the claims that Modified Gravity can take the place of Dark Matter, physicist-blogger Sean Carroll of Cosmicvariance discusses this in his presentation

Anyway, the choice is between creating new theory from what is observable (not inferred), or using the old theory and introducing unobserved stuff into it. The LHC from CERN and the other colliders in the works can answer which way the research goes. (Where do they get all that money?) If the LHC turns out to be a dud, then as Prof Joao Magueijo of Imperial College once said, "Maybe it's time someone rubbed Einstein out."

Jeg, the evidence for Dark Matter was provided, not by particle colliders, but was based on the the Wilkinson Microwave Anisotropy Probe (WMAP) which provided more detailed mapping of the Cosmic Microwave Background (CMB) radiation in the early universe. In Sean Carroll's presentation, he points to the WMAP readings (in slide 17 and slide 24) where he points to the 'third peak' as evidence for 'Cold' Dark Matter.

Here's a more interactive rendition of that chart from another physicist-blogger Bee where the pink bar (representing various predicted amounts of Dark Matter)and resulting temperature map agrees with the actual WMAP readings as shown by height of the 'third peak'.

We'll see. But if these people are to be believed, we won't be here long enough to find out. :-)

(And did you see the size of that thing? Again I ask, where do they get all that money? Havent they heard of poverty? Famine? My credit card bills?)

As for the expense, money goes around via the multiplier effect so some of it would be recycled to feed the hungry. At least, unlike the Europeans they're not spending it in technologies that would kill people. (Of course, if the LHC-doomsday scenario is right, this would be an ironic statement.)

sorry, the above should have read 'unlike the Americans'...