Took a break from posting last week because of work and my travel to Europe. Last Saturday, i met up with fellow blogger Hillblogger and her husband. After a delicious and filling dinner featuring her husband's roasted lamb and potatoes, we went around the city and saw the Grand Place, which i consider one of the most spectacular looking town squares in Europe and is on the list of UNESCO's World Heritage Sites. 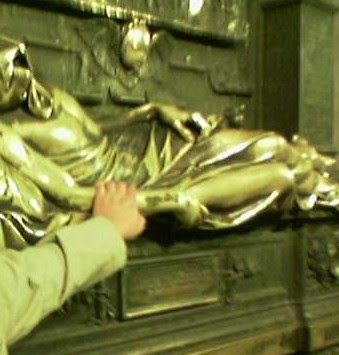 The picture above shows the reclining statue of Everard 't Serclaes, an honored citizen of Brussels from the late Middle Ages. (Rubbing the statue is supposed to bring good luck which accounts for my hand on the statue.)

A few meters from the main square is the world famous Manneken Pis and i was surprised to find that the statue is smaller than it looks from the standard photos.

Among the Brussels (and Belgium)-related facts i learned from Anna and her husband are:

I'm glad to have had the chance to finally meet Anna in person after two years of exchanges in the Blogosphere.

Anna will be visiting the Philippines too. I look forward to meeting her. I believe she'll be here in August just about the same time you'll be here. Yes, another EB is in order.

I'm glad that you two beautiful people have finally met.

You went to Brussels and didnt mention anything about the-yum!-beer? :-D

I missed Anna de Bruxelles when I was there. She had to go to Paris at the time. We spoke on the phone. Lovely woman, I could tell even from the phone call.

so kind of you!

very happy to have met you too finally.

Yep, sorry to have missed you then. Hope we can set a date soon.

Thank you for the kind words.

Looking forward to our group EB in Pinas one of these days...