A Tale of Two Statistics: Family Income and GDP per Capita

In her column discussing the results of the 2006 Family Income and Expenditure Survey (FIES), Solita Monsod asked:

"The bottom line here is that if the FIES tells us that poverty must have increased from 2003 to 2006, what with average incomes of the bottom 30 percent decreasing, why is it that our National Income Accounts estimates for the same period tell us that real per capita gross domestic product has increased? How are these conflicting statements to be reconciled?"

The divergence between GDP per Capita and Annual Average Family income is indeed odd because they are both supposed to measure income per given unit of population, i.e. per individual in the case of GDP and per family in the case of the FIES. 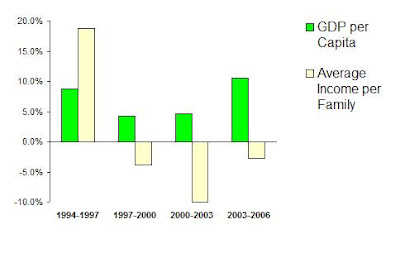 (click on image to enlarge)
It turns out that except for the 1994 to 1997 reporting period, the two measures of income have diverged. From 1997 to 2006, if one looks at the per capita GDP, the story is of one of continuous improvement in incomes. By contrast, if one looks at FIES, we get the opposite picture, one that shows consistent deterioration in incomes.

As i commented over at Manolo's blog (here and here), one possibility is that GDP is being overstated because of smuggling which understates imports. I also mentioned other possible reasons i could think of:Any advice explaining the above discrepancy would be most welcome. 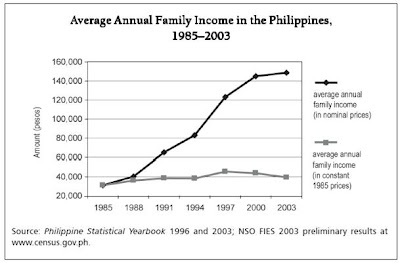 (Click on image to enlarge.)
Looking at the line depicting the Average Annual Family Income (in constant prices), it's alarming that the average seems to be falling back to levels last seen in the late 80's.

Update Feb-04-2008 12:32am: Monsod's fellow ex-NEDA Chiefs Cielito Habito and Felipe Medalla have also expressed similar misgivings as early as last July, 2007. At that time, this was the NSCB's response (thanks to commenter INE for the link.) This response points to a more detailed explanation (pdf file) by NSCB Secretary General Romulo A. Virola. IMHO, the explanation still sounds lame to me as it is just a more elaborate way of saying that the two measures are different, without providing actual numbers to back it up.

Side Note: I stumbled across this simplified circular flow model which is useful for visualizing investment, income and expenditure flows between the business and household sector.
Posted by cvj at 11:08 PM

I don't rely on any government figure, what I rely on is what I experience. The peso's buying power continues to decline. Last year, my sales was down 20%. Even with the Christmas season, my sales did not even equal the previous years. The start of the year is the same and I expect another drop.

GMA has been changing the interpretations of everything. Need I say more?

Hi Schumey, which is why i'm wondering where all the GDP per capita increase is coming from. It's like this Administration is engaged in Enron-style Financial reporting.

When the US military built those highways in Basilan, the expenditures got added into GDP. The construction cost for C5 and all the flyovers also go into GDP.

Hi UPn, your line of reasoning (i.e. business income vs. househole income) is the reason why i linked to the simplified circular flow diagram in my blog entry. From there, we can see that income circulates between the business and household sectors. If a good portion of business income is not flowing into household income, where then does it go to? That's the part that needs to be accounted for.

Can you send me raw data (by year) of FIES and GDP?

The aggregated data by year masks some important distinctions when analyzed on a year to year basis. Maybe the graph may not look as neatly as you have shown.

I emailed you earlier, so you will have my addy to respond to.

Hi Hawaiianguy, i'm sorry but can you resend your email address again? I can't seem to find your previous email.

Maybe it means that:

a) There are individuals with small or no families who are earning much much higher income rates, thus raising the per-capita GDP, but

One also has to take into account the pattern that career-oriented people with higher gross incomes have smaller families than blue collars and those in poverty who tend to have larger families.

Jon, if the sample surveyed in the FIES was truly representative of the Population (i.e. obtained via random sampling), then the childless rich couple (or a small group of oligarchs) should also have been captured by the data gathering exercise and would have pulled up the average.

While we cannot discount the possibility that the random survey is missing out on these high income couples, for the NSO to consistently miss them out for ten years (over 3 measurement periods between 1997 to 2006) means that we have bigger problems with the reliability of our economic statistics.

Also, if your scenario is true, then that should be reflected in terms of greater inequality (as shown by the Gini coefficient). The thing is, over the same period, inequality was reported to have decreased.