In his Manila Standard column, Peter Wallace pointed to the disconnect between GDP growth and oil imports:

"Imports were 6.6 percent less in 2007 than they were in 2006. Now in a healthy, growing economy that’s a most unlikely event. Within that oil imports fell 5.6 percent. Now that’s just impossible." [emphasis mine] "You can have some slowing if there’s a shift to alternative fuels, but in 2007 there wasn’t to any significant degree. Oil imports should be growing close to GDP growth, a bit slower but close, and not showing a contradicting trend as it did in 2007. So you’re left with only one logical alternative: smuggling increased substantially."

I share Wallace's misgivings because common sense leads me to believe that higher income leads to higher energy consumption and hence the need for more oil imports. Over at Manolo's however, fellow commenter Ca T questions the existence of such a correlation and she asks:

"...with regards correlation of oil imports to GDP growth, is there a study which shows there is high correlation? then what is the correlation coefficient..." - The Ca T, March 6th, 2008 at 3:27 am 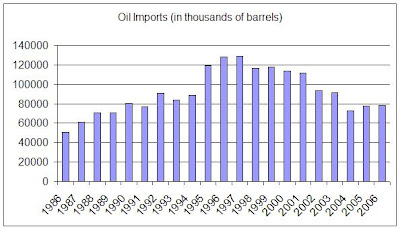 click on image to enlarge
I then divided the above by the applicable population for a given year and mapped the result to GDP per capita** as follows: 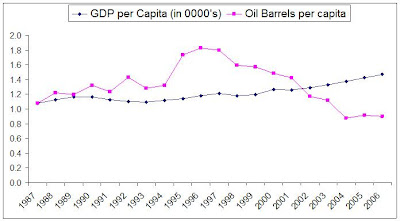 click on image to enlarge
The resulting correlation coefficient for the entire 21 year period (1986 to 2006) turns out to be weakly negative with a value of -0.35 (see top portion of following diagram). This means that a rising per capita GDP results in a lower volume of imports over time which is contrary to Wallace's claim as quoted above. This is quite different from the expected relationship and is different as well from the relationships found in the United States that shows a strong positive correlation between gdp per capita and oil consumption (estimated at +0.68). 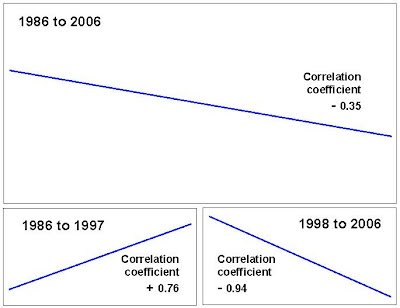 A closer look at the data reveals a sharp difference in the relationship before and after 1997 (see bottom portion of above diagram). From 1986 to 1997, there is a strong positive correlation (at +0.76) between per capita GDP and oil imports similar to the one observed in the United States. Starting 1998 until 2006, however, the relationship becomes strongly negative (at -0.94). What accounts for this sudden reversal in the correlation after 1997? A further breakdown into periods of expansion and contraction sheds light on the anomaly. The diagram below shows the correlation coefficients between per capita GDP and oil imports during the three periods of expansion under Cory, FVR and GMA as well as the two periods of contraction that are sandwiched in between. 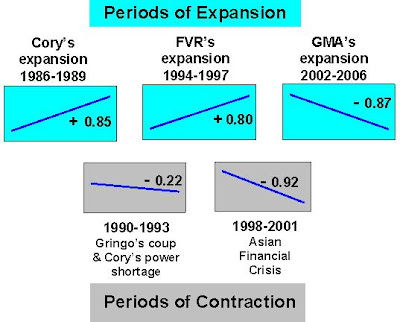 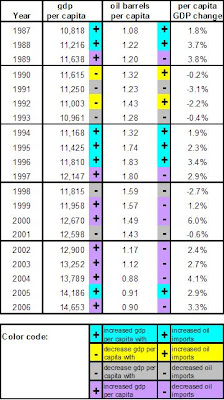 click on image to enlarge
The per year breakdown above explains the strength of the correlations. Starting 1997, the behavior has been almost completely dominated by an increase in GDP being accompanied by a decrease in oil imports. This has resulted in a situation where the high water mark in per capita GDP level during 2006 exists side by side with a per capita oil imports falling below the 1987 level. Strange (not to mention fishy).

I wonder, could this be explained by an increased reliance on coal and natural gas rather than oil for power?

Strange, don't you think? The presumption is, if presumption it should be called, that an expanding economy requires increased demand in energy. Pretty commonsensical unless there was a shift in source. Or the new industries were not as power driven. Where are we expanding? Not in manufacturing, it would indicate, where we would be needing energy-hungry machines but in service-oriented industries.

Smuggling has always been a problem so the figures on oil import could be as unreliable.

Hi Jon, i'm looking into your question (also pointed out by commenter UPn Student in Manolo's blog), the results of which i'll post as soon as i can.

Hi ricelander, on which sectors have been growing during Gloria's time, i checked the NEDA figures and summarized them in this chart

The ones that have constant growth rates are Manufacturing, Agriculture and Fisheries, Transport and communications and Electricity, Gas & Water.

As i mentioned to Jon above, i'm currently looking into the relationship between oil consumption (mostly imports), energy requirements and GDP growth.