Using the information found on the Genographic Project website's Atlas of Human Journey, i have drawn a Family Tree based on the Y-DNA Haplogroup classifications: 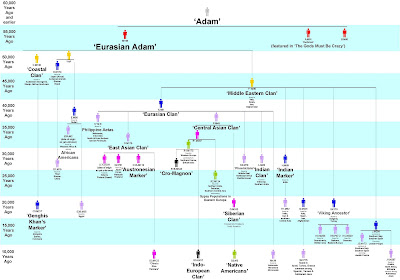 Figure 1: Human Family Tree Y-DNA
Click on image to enlarge
I encourage you to browse the image above as it has some interesting relationships.

Update April-25-2008: Based on the Family Tree above, i have measured the degree of separation of each Haplogroup to every other Haplogroup by working out a route via the nearest common ancestor which i then tabulated below. 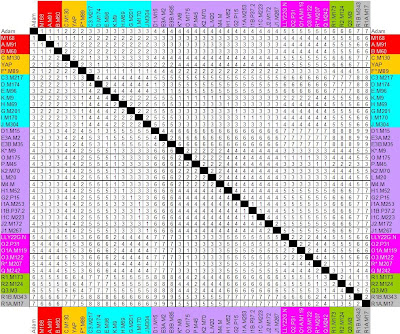 Table 1: Degree of Separation between Haplogroups
Click on image to enlarge
For example, as shown below, the degree of separation between Haplogroup O3.M122 (i.e. a marker associated with China's first rice farmers who spread throughout China and Southeast Asia) and Haplogroup O1A.M119 (i.e. associated with the Austronesians, a linguistic group that includes present day Filipinos) is '2'. Both the Austronesians and China's first rice farmers share a common immediate ancestor i.e. Haplogroup O.M175 (i.e. the 'East Asian Clan'). 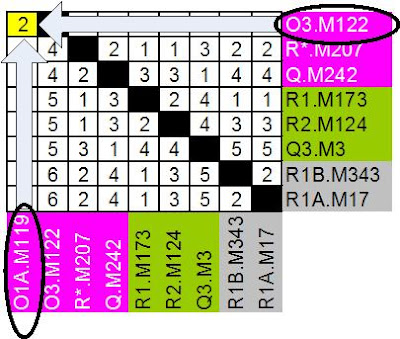 Example 1: China's First Rice Farmers and the Austronesians
By way of comparison, the degree of separation between Haplogroup O3.M122 (i.e. China's first rice farmers) and Haplogroup C3.M217 (i.e. the Mongols with Genghis Khan's Marker) is farther with a value of '6'. In this case, we need to go back a few steps further up the family tree to find their common ancestor Haplogroup M168 (i.e. the 'Eurasian Adam'). 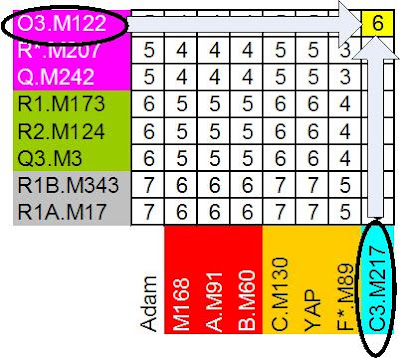 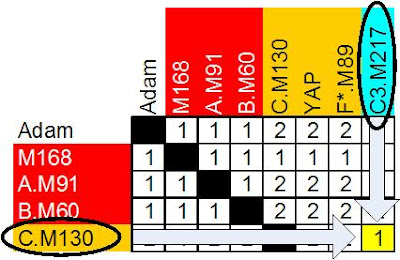 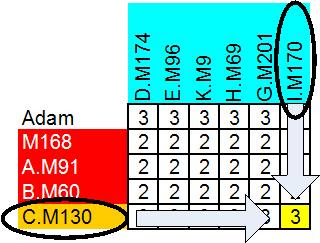 Example 4: The Australian Aborigines and the Vikings
...than Haplogroup I.M170 is to the Cro-Magnon Haplogroup R1B.M343 to which many of today's Western Europeans belong. 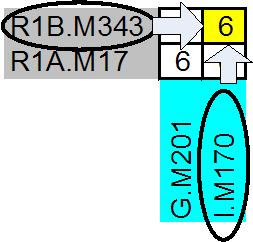 Example 5: The Vikings and the Cro-Magnon
It is clear from the preceding examples that the previously established major racial categories (e.g. Caucasoid, Negroid, Mongoloid, and Australoid) are no longer scientifically valid.

Update April-28-2008: At the comments section, do check out a critique of the Genographic website's Haplogroup descriptions, which according to the commenter, is less accurate than the equivalent entry found in Wikipedia.

First, it is important to keep in mind that the tree is constructed based on genetic "splits" that occur when one male offspring acquires a mutation in his Y-DNA; if this male offspring who has acquired a mutation produces prolific male descendants in the direct line of paternal descent, then the branch of the phylogenetic tree of human Y-DNA which has been defined by the particular mutation acquired by this male offspring will become populous and "notable." The phylogenetic tree has been most elaborately defined in the parts where the branches contain a larger percentage of present-day males; the less common branches have tended to be neglected and are not defined with the same degree of resolution.

Second, the association of haplogroup O3 with "Chinese rice farmers" is very shaky; although haplogroup O3 is the most common Y-chromosome haplogroup in China, it is also the most common haplogroup in Korea and the Philippines, as well as being the second most common haplogroup in Polynesia, where it is found in approximately one quarter to one third of the male population. Haplogroup O3 is also found at lower frequencies in Central Asia, Tibet, Indochina, Manchuria, Japan, Indonesia, even parts of India and Pakistan. Have all these places really received enough genetic input from "Chinese rice farmers" for their Y-DNA distribution to be affected so much? I will remain agnostic on this question until more solid evidence has been presented.

O3-M122 is for sino-tibetan language, just like R1-M173 is for indo-european language

language affinity is a much better indication of genetic affinity.

indo-europeans speakers are a majority of R1-M173.

sino-tibetan speakers are a majority of O3-M122.