Here is a state chart diagram showing the state of Philippine democracy as defined by the combination two sets of attributes: dictatorship/democracy, elitist/popular. This maps recent past events to the above combination.

The arrows in the diagram depict the historic events that have resulted (or almost resulted) in a change from one state to the other. The original EDSA put an end to Marcos' dictatorship and brought back elite democracy. It also dealt a serious blow to the CPP/NPA's movement to establish a popular dictatorship. 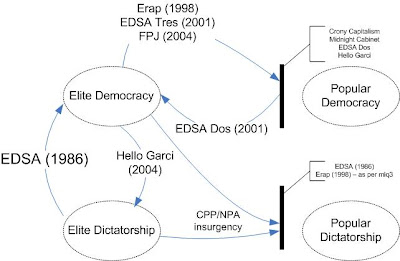 Erap's election victory signaled the move towards a popular democracy. Unfortunately, Erap was not true to his campaign slogan ('para sa masa') in that, among other things, he still kept company with Crony Capitalists and warlords one of whom led to his downfall. EDSA Dos put an end to this experiment and brought back the status quo. Moreover, EDSA Tres, which was a genuine expression of popular democracy failed to achieve its objectives. Likewise, FPJ's run for the Presidency also failed because, in a large part, due to Gloria's cheating. With the issues concerning her legitimacy not being addressed, we can consider ourselves in a de-facto dictatorship which is tacitly supported by a segments of the elite and middle class which constitutes a significant minority. The persistence of the status quo has in turn has further alienated the masses which is currently fueling the CPP/NPA insurgency.

The next entry discusses future scenarios that may cause a further shift in state.
Posted by cvj at 5:35 PM