This is an update of the GDP Growth Dashboard from the previous entry to include the 2Q 2007 figures. The graphic below shows the quarterly growth per sector from 1Q 2004 to 2Q 2007: 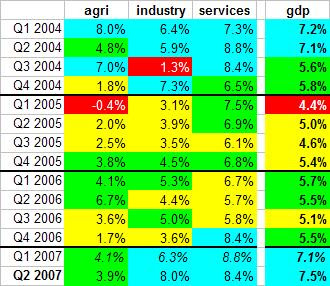 The first thing that can be noticed is that the growth figures reported for the previous quarter (1Q 2007) have been revised as follows:


The improved growth for the Industrial sector from 6.3% in the first quarter to 8.0% in the second more than compensated for the decelerations in the Agriculture and Services Sector. Within the Industrial sector, the Construction and Mining Industry Groups contributed the most to the growth acceleration.


I am unable to access the NSCB website as of now so i will have to update this entry later once i'm able to do so.

Update Sept-03-11:32PM: Unfortunately, the NSCB website is still inaccessible so i will have to make do with available data from the press releases to update the GDP Growth figures (expenditure approach):

Update Sept-06-8:30AM: Here is the updated graphic as derived from the NSCB Web Site data:

GDP Growth: Expenditure Approach (click on image to enlarge)
The following are the adjustments to the First Quarter 2007 figures:


Both Personal Consumption (pce) and Government Consumption (gc) played a big role in boosting GDP and so did Capital Formation (cf). In contrast, export growth (x) and import growth (m) has been anemic.

I cut and pasted this post and sent it to my big baby boy "to analyze for me."

A question - since as you may have guessed (and quite rightly too)I'm virtually an illiterate when it comes to statistics, etc. - could the rapid growth in the mining industry, excavations of our mineral wealth sort of, be a huge contributing factor to this wonderful economic growth that Pinas is experiencing?

Could we take that factor as a given in the scheme of statistics provided by the administration? If so, how could the result translate into net advantages for the poor or the impoverished sector, bearing in mind that foreign investors naturally take home a portion of their profits?

(Been trying to read books, basic that is, related to economics - must say they are still mumbo jumbo in my head!)

Oh yeah, this is Anna!

Hi Anna, thanks for asking. I think that question requires a blog entry on its own. No doubt that the growth of mining / quarrying was crucial to achieving the 7.5% growth (around 0.5% was added due to this sector alone).

All things being equal, any kind of increase in economic activity is good for the people. Of course, all things are not equal. For one thing, the GDP statistics alone cannot measure the environmental damage from mining. There is also a question of whether this method growing by exploiting our natural resources is the optimal one compared to the alternative strategies pursued by China and Vietnam.

One thing that could be said is that it is not a creative strategy. It does not take a PhD economist, much less a visionary, to come up with such a program but i suppose that Gloria is entitled to make the most out of the situation.

Thanks for the reply.

What seems so disproportionate to my illiterate mind is the contribution to this current growth by the mining and quarrying industry at 33% compared to say, agri and to MANUFACTURING, even to services. Alarming to my untrained brain compared to the rest of the items!

At the end of the day, those damages will cause a terrible economic imbalance, particularly when the future govt or govts will have to compensate, i.e., spend, pay for, etc., for the damages caused against the environment and the people (hazards to health).

Sorry, I'm perhaps not being clear but that's how my old, tired brain see things or interpret all these statistical mumbo jumbos from where I sit.

As to the environment, the mining industry today is what the loggers were in the previous generation.

As to the Construction Industry, economist Cielito Habito points out that this was more due to government construction rather than private construction. In his article in the Inquirer, Habito says that:

"overall construction growth was actually dominated by government construction, which grew 39.6 percent against an anemic 2.5 percent growth in private construction. "

As of now, i don't know how to measure trickle down effects, and i take your point that it would be great if this can be measured. Maybe some professional economist would know how to do this.

Thanks again for your opinion - appreciate it.

Thanks too for the patience!

That's what we get for having Atienza in the DENR. Years from now, when the mines are closed, only then would we know the extent of damage this mining boom has created.

I'm not against mining as long as the Filipinos really would benefit from it. But history has shown us how foreign firms take care of the environment.

If the manufacturing sector is the one heading the list, then I would believe the claims of the administration. As long as I see that even our daily needs are imported, then that claim is ridiculous.

Hi Schumey, i agree that an acceleration in the manufacturing sector would have been a much better kind of growth. However, GMA (and her predecessors) neither has the will nor the ability to implement an industrial policy similar to that of our neighbors'.

I just hope that the benefits of the growth in GDP and GNP will trickle down to the majority of our population which lives below the poverty line. As a developing nation, they are a major indicator whether or not their lives improve or not.