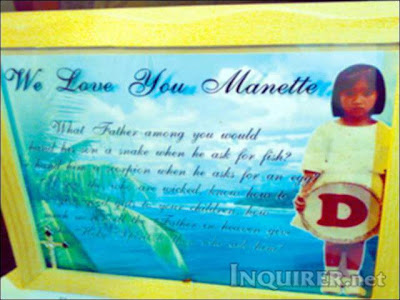 "There is this mind-set, which I think is so passe, that says: ‘The country is in shambles and the country is having a hard time and you are out there partying.’ But this generation is guiltless when it comes to that." - Tim Yap

"PAGPAG":Recycled Garbage Food for the Poor

I just watched the episode on" Poverty in the Philippines" on ANC's "Crossroads " .I got so depressed when I learned about a coping mechanism of our very poor called "pagpag".In the vernacular,"pagpag" is a verb that describes the act of dusting off dirt.One does this with food, such as a piece of bread, when it accidentally slips your hand and you rescue it from the floor. You can still eat it, just dust it off or "pagpag" it.

In Payatas, people makes a living by recycling garbage."Pagpag" is apparently a very common practice there.

They gather the thrown away plastic, papers, and whatever they can find, including food, that could still be recycled. They sell the papers and plastics to the factories and the recovered food items, usually half-eaten meat, to some stall-owners who cook them again and sell them to the customers. This dish is "pagpag". The verb has become a noun.

One angry viewer called the "Crossroads" program to express outrage that the "Pinoy Big Briber" can give away P500,000 packed in brown bags to Governors and Congressmen while the very poor are eating recycled garbage food called "pagpag".

Hi Equalizer, i agree. That's one more example of Gloria's trickle down economics in action.

Unless society will get its act together, poverty will not be addressed. In my opinion,

The RC Church must cooperate in population management. Preventing the sperm from meeting the egg, whether natural or not, is not abortion. But messing it up after the union is already a crime.

Employers to give and do more, when capable, i.e
The rich barangay for a poor barangay
In our own little way, we can share our time. resources, talents to educate, assist and help the less privilege get out of their situation.

Citizens action, political will to rid our society of the corrupt and cheaters.

More budget for education, health and other public services.

I believe the private sector is doing its share. The problem lies in government's inaccessibility. Government should inform and reach out, it shouldn't wait for the people to come to them.

Perhaps this administration is so used to people going to the palace for their gifts. If only the poor kid new who to approach, this tragedy could have been averted.

Thanks, Equalizer for input on "Pagpag."