From the passage quoted in the preceding post, we can see that:

A country that is abundant in land and capital but poor in labor, as well as one that is abundant in labor, but poor in land and capital will experience class conflict when it comes to trade policy. As stated in Helpman below, the latter case has been experienced in the Germany. (Randall Stone's powerpoint presentation linked to below also mentions the United States in the 20th century as an example of the former.)

A country that is rich in labor, but poor in capital and land, as well as one that is rich in labor and capital but poor in land will experience rural-urban conflict in the realm of trade policy. Again, as stated in Helpman above, the former has been the case in the United States in the 19th century, while the latter condition was true of Great Britain in around the same time frame. 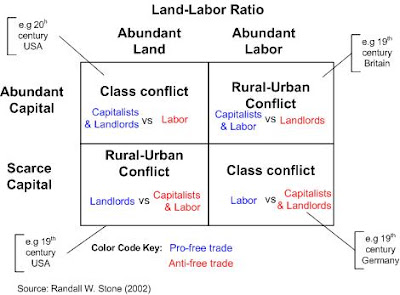 Assuming the above is true, the question is where the Philippines is situated. My guess would be that the Philippines with its abundant labor and relatively scarce land and capital is similar to Germany (in the 19th century) in that landlords and capitalists will prefer trade protection while labor will support freer trade. The above matrix also indicates that the divisions between rich and poor is deeper than the cleavage between the urban and rural areas. It is worth remembering that the issue of 'Imperial Manila' is being highlighted by the landlord dominated Congress.
Posted by cvj at 6:51 PM