In any other country, the political deathwatch would have ended at this point. 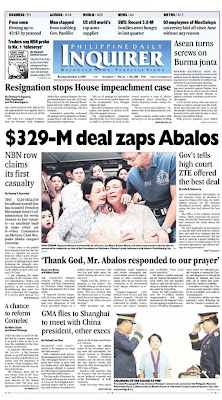 Since we are not any other country, the watch continues. For one thing, Manolo thinks it's a clever gambit. Since i'm not that politically astute, I allow myself to be more sanguine for now.
Posted by cvj at 11:59 PM

Congratulations on your Deathwatch Abalos but he is still alive and I have no doubt Gloria's govt will do everything in its power to save Abalos from the gallows.

I think Manol is right about the gambit. Abalos is giving it his all!

His resignation came way too late that I see nothing noble in it.

It was the Machiavellian way out.

If he resigned that very moment he was implicated, I would have sung his praises. I would have believed his line: "I will resign so as not drag COMELEC into the controversy." He dragged COMELEC not only into the controevrsy but into a stinking muck it will take a very long time before the agency will be able to wash off the smell.

Why did he resign? Because he knew he would be impeached after the unelected President's mena and horses allied with the pro-impeachment bloc in the House.

Good riddance. At least, he saved the Filipinos some millions of pesos that would have been spent for his impeachment.

Its just beginning. Now its time to grill him more. I am sure it will lead to the palace.

lol. at ur intro. and i would've lol more had you posted the frontpage of the very 1st time the news was broken that Abalos had a hand in the deal. that would've been truly the real political death of any other official in any other country.

it's like when news broke Larry Craig pleaded guilty to soliciting sex. at that instant, he was already politically dead. the rest was just dragging it out slowly.

i would've lauded him had Abalos resigned during the Mega Pacific scandal. instead he stuck like a leech, and now he's telling us he's resigning (only months b4 he retires?) to save the COMELEC's image? para san pa dong? sinira mo na lahat!

Agree with Chyt on the nothing noble purpose of Abalos resigning today (3 months before retirement anyway) but just the same I give him 2 points out of 10 for doing it considering that it is SOOOOOO rare for a big fish in govt to resign his post.

just checking out your blog. quite interesting. anyway, will explore your blog first. thanks for the invite btw.

Hi Harry, thanks for accepting the invite!